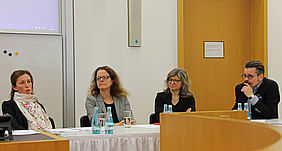 The main topic of the Women in Finance Workshop held on 22 March 2019 at Goethe University Frankfurt was how women experience the financial world differently compared to men. The conference was organized by the House of Finance, the Center for Advanced Studies Foundations of Law and Finance and the Ruth Moufang Fond. The conference aimed to promote women academics in finance by presenting female role model researchers in the area of finance and giving young female researchers the opportunity to gather feedback on their research and career recommendations. Many young women accepted the invitation to listen to leading female researchers talk about their experiences and the current state of female research in finance.

In his opening keynote speaker Samuli Knüpfer from BI Norwegian Business School presented his paper “What prevents women form reaching the top?”. He studied the career progression of women in Sweden and noted childbirth as a substantial contribution to the slower female career progression. He called this the childhood penalty, which became a main topic in the following panel discussion.

The discussion on “How to get tenure (as a female)” was lead by three female researchers. First Alexandra Niessen-Ruenzi from the University of Mannheim who focuses her research on gender differences on capital markets and how women and men invest their money differently. Second Isabel Schnabel working as a Professor of financial economics at the University of Bonn and member of the German Council of Economic Experts and finally Loriana Pelizzon, researcher at the SAFE Goethe University and Program Director of "Systemic Risk Lab". Enrico Perotti from the University of Amsterdam moderated the discussion.

In the first session, Zwetelina Illiewa from the Max Planck Institute for Research on Collective Goods presented her paper about “Wall Street Crosses Memory Lane: How Witnessed Returns Affect Professionals' Expected Returns”. She investigated how the beliefs of professionals about future returns are shaped differently regarding their first year in the financial industry. Alexandra Niessen-Ruenzi afterwards discussed her results.

Zwetelina Illiewa was followed by Tabea Bucher-Koenen from ZEW Mannheim presenting her paper “How do seemingly smarter people get better advice?”, in which she tries to prove that ?nancial advisors discriminate women by more often recommending costly products to them than to men. Tobias Berg from the Frankfurt School of Finance & Management discussed her paper.

In the second session Zorka Simon from the SAFE Goethe University presented her paper “The Pricing Implications of the Oligopolistic Securities Lending Market: A Beneficial Owner Perspective” in which she shows that in the non-transparent, oligopolistic securities lending market less connected market participants are underrepresented. In her conclusion this leads to pricing inefficiencies. Christoph Schneider from Tilburg University afterwards discussed her findings.

Kathrin Schlafmann from the Institute for International Economic Studies & Copenhagen Business School presented her paper “Overpersistence Bias in Individual Income Expectations and its Aggregate Implications” about the forecast errors of household income by showing that agents overestimate the persistence of their income. Jirka Slacalek from the European Central Bank was the discussant of her paper.

The third session started with the topic of “Shadow Governance” by Cathy Hwang from the University of Utah and was discussed by Oliver Spalt from Tilburg University.

The conference closed with Larissa Scha?fer from Frankfurt School of Finance & Management talking about "Brexit" and the Contraction of Syndicated Lending” and Jo?rg Stahl from Cato?lica Lisbon School of Business & Economics as discussant.  Looking at the corporate loan origination she documented a major issuances drop in the UK syndicated loan market following the Brexit referendum.