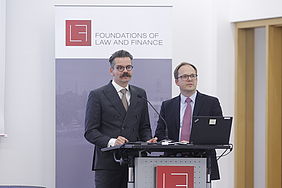 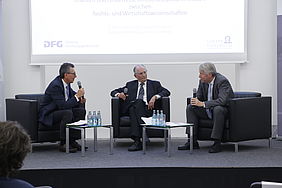 The DFG Center for Advanced Studies "Foundations of Law and Finance" has started its work on November, 1. It is the first interdisciplinary economic and jurisprudential research group in Germany. This was also the occasion for a festive event on the same day, which focused on the opportunities and obstacles in the interdisciplinary discourse between law and economics. More than 200 people accepted the invitation to the House of Finance of Goethe University Frankfurt.

The new research group is dedicated to a "social issue of global importance," as Simone Fulda, Vice President of the Goethe University, said in her welcoming remarks. The scientists involved will examine the impact of institutional and regulatory frameworks on financial market decisions and their outcomes. The aim is to take a closer look at the interlinking of law, economics and politics in this area and thus, to measure and indirectly be able to assess real economic effects on legislative proposals and changes.

The two directors, Tobias Tröger and Rainer Haselmann, presented the structure and core areas of the new research group. In total, 8 professors of the Goethe University, 2 postdocs, 8 junior fellows and 20 fellows will work on four main topics. These are market price reactions to legal norms, impact analyses of the legal framework of corporate governance and of financial market regulation and the political economy of regulation - these are the factors that determine why some regulations are implemented effective but others not. Especially with this topic, the perspectives of political scientists and sociologists should be included, so Haselmann.

Tröger made clear that the cooperation of law and economics is not easy because of the different methods and approaches of the disciplines. However, it is also an opportunity: "The goal is that both disciplines use their strengths and thus create synergies," said Tröger. Economists could show causal relationships better while lawyers could bring in their level of detail. This could result in better analyses. The new group wants to make "Law and Finance" a core area of Goethe University, said Tröger.

In their keynotes, Martin Hellwig, Director em. of the Max Planck Institute for Research of Collective Goods, and Klaus J. Hopt, Director em. of the Max Planck Institute for Comparative and International Private Law, talked about the obstacles and opportunities the discourse between law and economics is offering. This discourse is "much needed, but difficult," said Hellwig. Jurisprudence is a normative discipline, while economics is covered here. "But efficiency is also a norm," said Hellwig. However, it does not occur in competition law or regulation. In Hellwig´s view, economists still have much to learn about norms. "Models are not theories, and lawyers are more aware of this than economists," said Hellwig.

The lawyer Klaus J. Hopt congratulated on the founding of the research group. "You are closing an important gap," Hopt said. How fruitful the cooperation between the two disciplines is, Hopt made clear on several examples. He recalled that the regulation of insider trading until the 1970s was unknown in Germany, in contrast to the United States. For a long time, the debate in Europe on how insider trading should be assessed was without any economic foundation.

Further, banker's rules of conduct are a good example from Hopt's point of view. So the self-regulation of credit institutions is not really pronounced, as the financial crisis has shown. "Voluntary rules have failed spectacularly," said Hopt. It is questionable what the institutional conditions would have to look like for functioning self-commitments. "We need a good mix of self-commitments and rules," stated Hopt. In addition to corporate governance, the issue of the effectiveness of supervisory boards could also be another field of research. So far, the legislator has taken decisions in this area, largely without taking into account current scientific findings. The research group could help disseminate economic and legal findings more strongly, said Hopt.