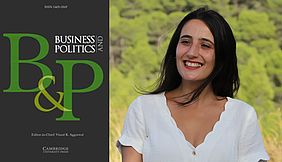 Dr. Elsa Massoc, postdoctoral researcher at the LawFin Center, published her recent work “Banks’ power and political institutions: the divergent priorities of European states towards “too-big-to-fail” banks: The cases of competition in retail banking and the banking structural reform“ in the Business and Politics journal. This article has now been selected as a runner-up for the David P. Baron Award.

The David P. Baron Award is a prestigious award that recognizes the best article published in Business and Politics (BAP) within a given year. BAP, a journal at the forefront of research concerning the relationship between public governance institutions and private firms, has been publishing work that utilizes social science tools in order to examine current economic policy issues for the past nineteen years. Recipients of the David P. Baron Award will receive a $300 award in books from Cambridge University Press.

Elsa Massoc’s article was honored as runner-up for the David P. Baron Award and can be read in Volume 22, Issue 2 of the BAP journal.

Her article examines how two dynamics, one global and one domestic, have interacted to shape the politics of banking in Europe. In the aftermath of the 2008 crisis, European governments were subject to renewed structural incentive to promote TBTF banks: in financialized economies, the growth of these banks is perceived as an essential element of a national economy’s global competitiveness. Yet, this incentive was subject to enhanced political contention at home. Factions—often led by actors from within the state itself—have opposed governments’ impetus to promote TBTF banks. The specific identity, preferences and resources of these factions are determined by distinctive political institutions and vary across countries.
Through the comparative analysis of banking structural reform and banking competition policies in the UK, France and Germany, Elsa Massoc argues that varieties of regulatory outcomes are explained by the differentiated institutional capacity of “anti-TBTF” factions to carry weight in policymaking processes across jurisdictions.

"Banks, power, and political institutions: the divergent priorities of European states towards “too-big-to-fail” banks: The cases of competition in retail banking and the banking structural reform"